David has enjoyed a successful 35-year career on Wall Street on the buy side and the sell side. 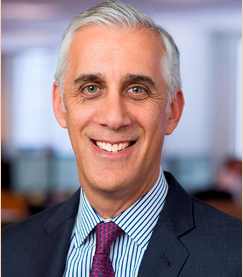 David has enjoyed a successful 35-year career on Wall Street on the buy side and the sell side – including as Goldman Sachs’ MD and as a Hedge Fund Head Trader – where he had a front-row seat to the historic secular bull market while participating in all of the financial shocks and corrections of the modern financial markets age.

David graduated from New York University (NYU) with combined Business Studies and Finance degrees plus an MBA certification in the late 80s and began his career as a trading clerk on the New York Stock Exchange.

He joined the Program Trading desk at First Boston (predecessor to Credit Suisse) as an active client portfolio seller in the Stock Market Crash of 1987, moving to the US Institutional Desk to begin his sales-trading career where he made his reputation after a classic value investing client became the buyer of choice for financial stocks during the Savings and Loans Crisis of the early 90s. At a young age, David was regularly trading some of the largest institutional blocks of bank stocks on Wall Street.

That early success attracted the attention of several renowned firms, and in 1994 David was recruited by Goldman Sachs to become a Senior Sales Trader in their US Shares business in New York. David was charged with covering some of the largest and most complex institutions that Goldman covered including Hedge Funds, global Investment Management companies and pension funds.

In the late 90s, Goldman Sachs asked him to manage the International Equity Sales and Trading effort in the Americas, where he arrived at the start of the Asian Currency Crisis, continuing to cover large clients in addition to his managerial role. It was from this ‘player-coach’ position that David developed his advanced mentoring skills. He takes great pride in seeing many of his mentees now leading trading desks on both the buy and sell side today.

In 2000, David was named a Managing Director and led the Goldman Sachs International Equity business to a $200 million revenue year.

In 2004, he retired from Goldman Sachs to help form Keel Capital, a global Long-Short Equity Hedge Fund, where he served as Head Trader and Risk Manager. Keel managed $250 million of institutional assets within a year of formation. Keel returned its capital to its investors in 2007 and David returned to the sell-side for leadership roles at Morgan Stanley and HSBC.
In 2012, he moved with his family to Washington, DC and re-joined Goldman Sachs in their Investment Management Division, advising Ultra High Net Worth families globally on their investable wealth.

In 2017 David left Goldman Sachs to set up his own Investment Management Firm Pearl Investments and joined the Institute of Trading and Portfolio Management as a Senior Trading Mentor. David’s role at the Institute involves Mentoring Institute Traders on the official Institute Mentoring Programme helping them to realise their objectives in becoming consistently profitable long-term and to help build their track records. David also helps manage the Institute’s global portfolio in allocating capital to profitable students/traders.